Garrett Mentors, Inc. > About Us > The Joan Johnson Inspiration Award

The Garrett Mentors, Inc. Board of Directors has named 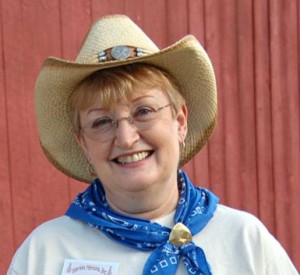 Joan Johnson served the children of Garrett County through Garrett Mentors for many years. She was a valuable member of the board and was the principal force behind the annual Garrett Mentors Barn Dance, which has become a fixture in Garrett County. Joan had a deep and abiding belief in the value of the Garrett Mentors program to the children of Garrett County and devoted herself to the effort to help those children. In 2013 Joan relocated to her home in Texas and resigned from our Board, The Board of Directors decided that an ongoing award  in her name was the best way to recognize her unparalleled contribution. In May, 2014, the Joan Johnson Inspiration Award was established and the first recipient of the award, Suzanne Harle, was presented with the honor.  Sadly, In October, 2014, Joan passed away in Texas. The Garrett Mentors organization and individuals involved will miss Joan immensely.  Her legacy will live on through the Inspiration Award and the children served by the Garrett Mentors Program.

Join our email list to receive newsletters and updates about our program and upcoming events.

We would love to stay in touch with you! Connect with us on Facebook to stay up to date.

Paypal or credit card donations can be made through our PayPal account. Checks can be sent to Garrett Mentors PO Box 725 Oakland, MD 21550.Consider becoming a sponsor of our annual Barn Dance and Silent Auction

We Need Your Support

As a non-profit organization we rely on your generosity to continue impacting children’s lives.